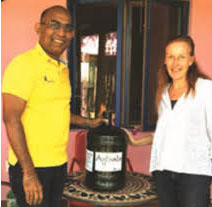 AlgEternal Technologies, LLC, delivered the first order of their microalgae blend soil amendment, Agtivate, to Ms. Pati Jacobs, co-owner of Bastrop Cattle Company, located at 510 Hwy 304, Bastrop, on Friday May 12. Agtivate is AlgEternal’s first commercial product coming out of their new facility in La Grange. Agtivate is a proprietary blend of several species of microalgae in a live culture that goes into soil and functions as the primary producers to boost the soil’s natural biological activity. Bastrop Cattle Company is famous for their grass-fed beef that has no antibiotics or hormones and they work hard to maintain that reputation.

Despite the difficulties involved in a small operation, Jacobs has long been a champion for ranching as a sustainable economic activity and applies her background as an environmentalist to ensure that their cattle dine on purely natural grass. She first heard about AlgEternal and their all-natural microalgae soil amendment from a friend, Wayne LaChapelle, who, as it turned out, recently became AlgEternal’s Chief Financial Officer. Wayne knew that Jacobs was serious about getting only the best natural products to use on her pastures and he got her in touch with AlgEternal and the rest as they say is history.

“We have not put any chemical fertilizers on our pastures for about ten years,” says Jacobs, “but on hearing about this purely natural product to improve the quality of our hay, I decided to give it a shot.” David Ramjohn, AlgEternal’s Chief Executive Officer, says, “Agtivate, being a live culture, essentially acts biologically in the soil, not just adding nutrient content like traditional fertilizers do but performing a variety of critical roles in soil health.”

Microalgae are ubiquitous in soils, where they form the base of the food web and support the complex microbial ecosystems comprising bacteria, fungi, protozoans, actinomycetes, etc. Unlike other microorganisms in the soil, which compete with plants for nutrients, microalgae produce their own food from sunlight, water, and Carbon dioxide and make nutrients that other soil microorganisms can feed on. Living microalgae in soil continuously support all other life in the soil. Microalgae also produce natural substances that improve soil permeability and protect plant root systems against diseases and pests. “Ultimately,” says Ramjohn, “if you take algae out of the soil then the soil dies unless you continuously provide chemical fertilizers for the other microorganisms to feed on, so they can do their work.”

AlgEternal believes in having data from independent sources to support their claims that Agtivate works to rebuild soil health in all soil types and that it is good for every plant type, from ornamentals to row crops, fruits and vegetables, grasses, turf, and even trees. They have been conducting trials with Texas A&M University’s David R. Winterman Rice Research Station at Eagle Lake since 2015 on rice, with data now showing that standard nitrogen can be reduced by 25 to 75 percent with no loss in yield or quality when applying Agtivate. AlgEternal has already signed up to be a sponsor at the Texas A&M’s Field Days at Eagle Lake and Beaumont on June 27 and July 13 respectively.

Tests by the Irrigation Research Foundation in Colorado using Agtivate on grain sorghum have also come back with superior results and these tests are now going into their second year, expanding now to corn. AlgEternal has also started testing this year with Texas A&M at the AgriLife Research Station in Yoakum, Texas, on corn, cotton and Bermuda grass, following on from tests on Sesame in 2016. “While we have had good results on corn in Colorado and hay here in Texas used on commercial operations, with good testimonials,” says Ramjohn, “those were not scientific trials, so we have invested in research with Texas A&M to get the proof we need. Our reputation is not what we say about us; it’s what others say about us.”

“Bastrop Cattle Company maintains strict standards,” says Jacobs, “and we are convinced that Agtivate is a natural biological agent and not a chemical fertilizer or we would not be using it on our pasture.” She goes on to say, “it’s worth and try and if it performs well and improves our yield, protein content and palatability, then we will certainly continue to use it and recommend it to our network.” For Ramjohn and AlgEternal, this is precisely the type of synergistic relationship they hope to build in Texas and throughout the US—supplying a company like Bastrop Cattle Company that values the same principles of sustainability and environmental stewardship. “Soil health is at the core of several problems aside from helping to produce higher crop yields with better quality,” says Ramjohn, “healthy soils retain water and nutrients preventing contamination of ground and surface water and they retain Carbon thereby reducing greenhouse gas emissions.”

From Ramjohn’s perspective, microalgae have gotten a bad reputation as pond scum and for algal blooms, when they are only doing what they were meant to do—clean up after humans. By putting them back to work in soil he believes that we are only doing what nature intended in the first place and repairing the damage we have done to soil over decades of industrial farming practices. This is the first step on the journey towards the ultimate objective for AlgEternal—to reduce human dependence on fossil hydrocarbons and create sustainable economic activity resulting in a healthier planet and improved quality of life for all, by harnessing the power of the Planet’s Primary Producers—Algae.