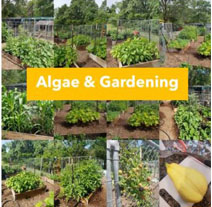 The Fayette County Record I recently started using an organic gardening product made right here in La Grange – AlgEternal’s ElixEarth soil amendment. AlgEternal CEO David Ramjohn and his team produce this microalgea product at the old Dodge dealership on State Highway 71 west of La Grange. I sat down with Ramjohn two weeks ago to learn about his product and to pick up a sample to try in my garden. Algae plays a critical role slowing erosion. These tiny organisms, which can number in the tens of thousands per gram of healthy soil, form a thin crust on the surface of bare soil. This crust protects the soil from eroding away in strong wind. Farmers can use algae to transition toward no-till farming practices.

The very day I spoke Ramjohn two weeks ago, a cold front pushed a massive cloud of dust from Kansas into Central Texas. That dust was made of tiny soil particles that got swept up by wind from bare ground. I’m willing to bet a lot of that bare ground came from recently tilled fields. Late September and early October is when many Kansas farmers till-in their corn stubble to get ready for planting wheat. Kansas farmers lost tons of valuable topsoil in that dust storm. If using algae was part of their farming practices, they might have saved their soil and we may have had clear skies that day. Algae also helps the soil breathe. Algae are photosynthetic. If you paid attention in high school biology class, you might recall the photosynthesis equation that takes place inside chlorophyll: 6CO2 + 6H2O + light ­ C6H12O6 + 6O2 In other words, six molecules of carbon dioxide plus six molecules of water combined in the presence of sunlight will yield one molecule of food for the plant in the form of glucose and six molecules of oxygen. This miracle of chemistry is responsible for life as we know it on earth. Scientists believe that algae were the first photosynthetic organisms on earth. Before algae, there were only bacteria that did not require oxygen to survive. Earth was a hellish environment with an atmosphere of carbon dioxide, ammonia and methane. As algae arose, they slowly converted carbon dioxide into oxygen. They continue to do so today. Ramjohn said algae use indirect, reflected sunlight so that they remain photosynthetic even several centimeters deep in the soil. They breathe oxygen, a byproduct of photosynthesis, into the soil and around the root zone of plants. The biggest reason farmers till is to loosen and aerate the soil, so roots can better breathe and take up nutrients. In this way, the humble algae can do the work of the largest John Deere tractors.

Ramjohn said algae have the ability to fix atmospheric nitrogen into the soil like bean and other legume crops. Over time, he said farmers and gardeners using algae may notice less and less need for fertilizer. Moreover, repeated applications can result in a self-sustaining population of algae in the soil. The more people use it, the less they will need to use it. “Maybe it’s not the best business model for us,” he joked. However, Ramjohn said AlgEternal’s business philosophy is concerned with not only profits but also with creating products that are good for the Earth. AlgEternal’s flagship product, ElixEarth soil amendment, contains at least 10 to 15 million cells per milliliter. A little goes a long way. Ramjohn recommends an application rate of one ounce per two gallons of water. For garden use, he recommends applying with a watering can whenever plants need to be watered. For large-scale applications, such as a hayfield or pasture, he recommends applying just before a rain using a tractor-pulled spray rig. He said some farmers mix it with liquid fertilizer so they only have to make one pass in the field. Chlorine will kill algae, so you can’t mix the product with city water straight out of the tap. Ramjohn said you can off-gas chlorine in municipal water by letting the water sit in a bucket for 24 hours before mixing. The company sells the product in various sizes from a single cup to five-gallon buckets. The pint-sized container was enough to cover my fairly large backyard garden. Smaller gardens may only require a cup. You can order online at elixearth.com or buy direct from their facility on Highway 71.

Ramjohn said some customers use the product as a foliar spray and have reported fewer insect problems. He theorized that the product’s smell may make plants unappetizing to insects. He might be right, because let me warn you, the stuff stinks pretty bad. To me, it smells like really sour laundry. Try not to spill any on your shoes or clothes. It might be a good idea to wear gloves. I applied the product one morning about two weeks ago during my regular watering routine. I already notice a few things: First, I have a large raised planter that stands about two feet tall. I always have trouble keeping the soil moist in this bed because it drains so well. Sometimes I have to water plants two a day to keep them from drying out. Since applying ElixEarth to this bed, I noticed that its holding a lot more moisture. Second, my greens seem greener. Maybe my eyes are fooling me, but it looks like my broccoli rabe and lettuce have turned a darker shade of green since the application of algae. My kale and collard greens seem to have taken on a more blueish color as well. They just look really healthy. I think this product may be of even more importance to hay growers and other large-scale agriculture operations than small gardens like mine. Give it a try and let me know how it works for you. If you have questions or comments about gardening, email me at andy@fayettecountyrecord.com.