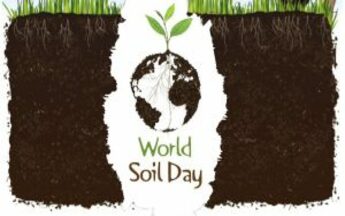 Be The Solution To Soil Pollution

The very word now connotes something inferior, unclean, or undesirable. We despise getting “dirty” or “soiled”, forbid our children to play in the soil or dirt, fear persons tracking soil or dirt into our homes, cars, offices. Our perception of soil affects our relationship with soil and we typically don’t even think of soil unless it messes up our clothes, furnishings, cars, floors, etc. We pour asphalt, concrete, or lay tiles, stones, etc. to avoid walking directly on the stuff. Similar to how we treat our oceans, we indiscriminately discard our solid and liquid wastes on the soil as long as it’s not in our backyard. We effectively dismiss, ignore, and revile the very resource that allowed all civilizations, including this modern age, to achieve the heights of development we enjoy.

If not for soil’s ability to grow food for our animals and for us to consume directly we would still be following herds of animals as they migrated. Agriculture formed the basis of modern civilization and agriculture relies on fertile soils. The first, second and third “green” revolutions all increased our ability to produce food from the soils. The First Agricultural Revolution, AKA the Neolithic Revolution[1], was the beginning of the transition to an agrarian society from a hunter-gatherer society. The Neolithic Revolution began in a region known as the Fertile Crescent…yes…fertile soil.  The Second Agricultural Revolution, AKA the British Agricultural Revolution[2], began in Britain and synergized with the Industrial Revolution, spreading through the world. The Third Agricultural Revolution[3], which spawned the term “Green Revolution”, (cf. Norman Borlaug) provided the ability to increase yields by grain hybridization and soil fertility by chemical nutrients. Some say that we are now in the age of the Fourth Agricultural Revolution[4], where technology, artificial intelligence, robotics, nanotechnology, and analytics (data/information) now enhance our abilities to improve yields. But it all depends on one single natural resource…soil. Fertile soils allowed the development of agriculture, which in turn allowed us to settle down, assured us of food, facilitated population growth, and created surpluses that could be traded, all of which created the time and space needed for societies to develop in other areas and grow into what we have seen in the historical record and what we know today.

Soil in danger; Humans in Danger.

As with every other natural resource on the planet, we have abused, misused, and overused our soils. Global declines in soil productivity, desertification, pollution, over-cultivation, over-fertilization, mono-cultivation, chemical applications, over-tillage destroying soil structure, erosion, changing land use, deforestation, destruction of soil biota, should concern us all[5],[6]. Many recent reports indicate both the rapidity of loss of soil resources and the terrifyingly low reserves left[7],[8]. Sixty (60) years of topsoil left on the planet?? If this doesn’t sound the alarms in every government and citizen of the world then nothing will. When we can no longer produce enough food for the billions what do we do? It takes 1000 years for 3 centimeters of soil to form. The frightening aspect of this isn’t the famine and death that will result when we have no more fertile soils; the truly frightening aspect is the sub-lethal effects that are happening right now! We pollute our water then pour it on the soil; we pollute the soil directly; where does this end up? Ever heard of bioaccumulation? Plants absorb the water in the soil; animals eat the plants; we eat the animals or the plants. I’d wager that we are at risk and that we have suffered the effects, are suffering the effects, without even understanding why. Ever heard of nitrogen pollution in the vadose zone?[9] We should all be concerned. Maybe the reason we aren’t is that we simply don’t know.

Save Our Soils; Save Ourselves:

Enter the age of the Fifth Agricultural Revolution, or what I choose to call the Regenerative Agricultural Revolution. The imperative to save our soils is identical to saving ourselves. Soil lies at the nexus of water, air, and human health. Healthy soils produce more and better food leading to healthier populations. Healthy soils don’t need as much irrigation since they hold and use water better (70% of freshwater use goes into agriculture[10]). Healthy soils hold more carbon becoming as a better sink for excess carbon thereby mitigating against global warming and consequent climate change. I could go on, but if you don’t get it by now then more information won’t help you.

We must find ways to stop treating our soils like dirt. Regenerative approaches to agriculture must take precedence over the previous industrial approaches and profligate use of chemicals. Our agricultural revolutions have done what was necessary since 10,000 BCE for us to achieve what we have as a species; however, these same agricultural revolutions now pose a significant threat to this planet’s ability to continue supporting our life forms. We have the knowledge, we have the capability, we can do this if the national policies, legislation, international environmental treaties, public awareness, all combine to facilitate the shift to regenerative agriculture. We must learn, adapt, and change our agricultural and land use practices or we will destroy our soils, one of the most critical components of the life support systems on spaceship Earth.